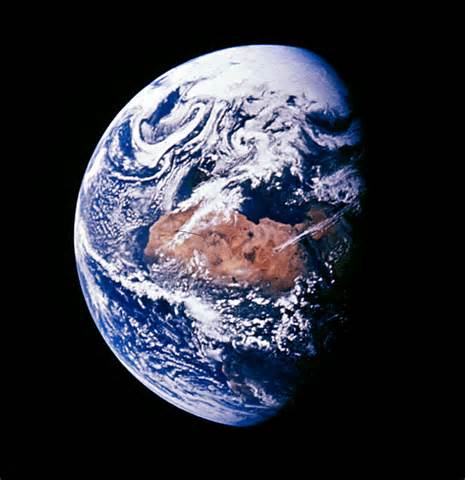 Lord, our Lord,
how majestic is your name in all the earth!

You have set your glory
in the heavens.
Through the praise of children and infants
you have established a stronghold against your enemies,
to silence the foe and the avenger.
When I consider your heavens,
the work of your fingers,
the moon and the stars,
which you have set in place,
what is mankind that you are mindful of them,
human beings that you care for them?

You have made them a little lower than the angels
and crowned them with glory and honor.
You made them rulers over the works of your hands;
you put everything under their feet:
all flocks and herds,
and the animals of the wild,
the birds in the sky,
and the fish in the sea,
all that swim the paths of the seas.

Lord, our Lord,
how majestic is your name in all the earth!

As Kingdom Venturers we are stewards – “rulers” – of creation. We are to be caretakers of our planet. We are not, though, to be worshippers of the planet.

Early civilizations venerated and followed the phases of the moon, the sun and the stars. They called the earth, among other adoring names, “mother.” These tribes, groups and peoples transferred the glory and sovereignty of God to the created.

With this post I hope to make you aware of the same subjugation and submission of people to “Gaia” going on today.  And, it is all based on the scientifically erroneous scam called “global warming.”

Beyond the UN using global warming as a means of transferring wealth from one nation to another via carbon credit formulas, there are opportunists (Al Gore comes to mind) who know that the young are easily swayed and cajoled into fighting for their ‘cause’. Plenty of money and zeal is transferred in the process.

Here is what I see.

Having made it through the sixties I understand youth’s hot-blooded fervor over and desire for revolution.  My own adrenalin was pushing me in all directions looking for answers and for my own special scene on the reel of history.

The Beatles gave us their theme song for those times:  “Revolution”  “well you know we all want to change the world.” Today’s youth are no different.  The adrenalin is still pumping wildly; the hot-button issues are different.

The sixties, basically a large party staged around the Vietnam War and the Cold War with its escalating nuclear armament, gave us the apocalyptic warning that the “Eve of Destruction” was upon us. The sixties also gave us zeitgeist as the narcissistic moral, intellectual and spiritual center of our universe.

As political philosopher Allan Bloom writes in “The Closing of the American Mind: How Higher Education Has Failed Democracy and Impoverished the Souls of Today’s Students (1987) when discussing certain professors at Cornell University (circa 1969) who gave up their intellectual credibility,

“The American university in the sixties was experiencing the same dismantling of the structure of rational inquiry as had the German university in the thirties.  No longer believing in their higher vocation, both gave way to a highly ideologized student populace.  And the content of the ideology was the same ~ value commitment. The university had abandoned all claim to study or inform about value ~ undermining the sense of value of what it taught, while turning over the decision about values to the folk, the Zeigist, the relevant.  Whether it be Nuremberg or Woodstock, the principle is the same.” (emphasis mine)

Today’s Millennials are no less radical in spirit but are clearly misguided due to the denouement of rational thought and critical inquiry. The sixties zeitgeist has fast-forwarded on history’s reel to the present. You’ll see it particularly in the theaters of politics and religion.

Here is just one example of what I am talking about.  This article may or may not shock you:

From the opening of Stanley Kurtz’s article, The WannaBe Oppressed, The National Review Online, October 16th, 2013:

What do America’s college students want? They want to be oppressed. More precisely, a surprising number of students at America’s finest colleges and universities wish to appear as victims ~ to themselves, as well as to others ~ without the discomfort of actually experiencing victimization. Here is where global warming comes in. The secret appeal of campus climate activism lies in its ability to turn otherwise happy, healthy, and prosperous young people into an oppressed class, at least in their own imaginings. Climate activists say to the world, “I’ll save you.” Yet deep down they’re thinking, “Oppress me.”

In his important new book, The Fanaticism of the Apocalypse: Save the Earth, Punish Human Beings, French intellectual gadfly Pascal Bruckner does the most thorough job yet of explaining the climate movement as a secular religion, an odd combination of deformed Christianity and reconstructed Marxism. (You can find Bruckner’s excellent article based on the book here.) Bruckner describes a historical process wherein “the long list of emblematic victims ~ Jews, blacks, slaves, proletarians, colonized peoples ~ was replaced, little by little, with the Planet.” The planet, says Bruckner, “has become the new proletariat that must be saved from exploitation.”

But why? Bruckner finds it odd that a “mood of catastrophe” should prevail in the West, the most well-off part of the world. The reason, I think, is that the only way to turn the prosperous into victims is to threaten the very existence of a world they otherwise command.

And why should the privileged wish to become victims? To alleviate guilt and to appropriate the victim’s superior prestige. In the neo-Marxist dispensation now regnant on our college campuses, after all, the advantaged are ignorant and guilty while the oppressed are innocent and wise. The initial solution to this problem was for the privileged to identify with “struggling groups” by wearing, say, a Palestinian keffiyeh. Yet better than merely empathizing with the oppressed is to be oppressed. This is the climate movement’s signal innovation.

Read the whole doggone article.  You’ll read things like white male Bill McKibben “almost single-handedly turned global warming into a public issue in 1989, his problem was solved.  Now everyone could be a victim.” And, “Climate activism answers their existential challenges and gives them a sense of crusading purpose in a lonely secular world. The planet, as Bruckner would have it, is the new proletariat.” (emphasis mine)

The cult or religion of global warming has it devotees circling the UN in hopes of coercing the world to pay up for carbon credits and, more importantly, to make themselves pseudo-martyrs for this now victims-everywhere cause.

Here are more thoughts about climate change’s religiosity from David Mamet’s book, The Secret Knowledge: On Dismantling of American Culture (2011). In discussing religion’s focus on the unknowable as applied to political and social issues, Mamet writes,

Observe that to propitiate an unknowable power, the Left, ignorant or dismissive of any society or history but is own, insists upon the primacy of Trees and Soil, Oceans and Animals ~ theirs is a return to the worship of the Savage.  To see that this nature worship is not quite the good simple-heartedness they believe it is, but rather a religion, observe its imperviousness to information:  polar bears are not, in fact, decreasing but increasing in population; the earth is not, in fact, warming.

It is interesting to note the points made above cinematically, in the two films The Day the Earth Stood Still. More specifically, the 2008 version underscores the thrust of Kurtz’s article:  “The planet, says Bruckner, “has become the new proletariat that must be saved from exploitation.””

You have undoubtedly seen one or both versions of the following movies.  You know the characters so I will go forward.

In the 1951 version of The Day the Earth Stood Still Klaatu’s message centers on a very real and immediate concern ~ The Cold War and nuclear armament:  “…government agents escort Klaatu to see Barnhardt. Klaatu introduces himself and warns the professor that the people of the other planets have become concerned for their own safety after human beings developed atomic power. Klaatu declares that, if his message goes unheeded, “planet Earth will be eliminated“. (From Wikipedia)

The 2008 version of The Day the Earth Stood Still centers around the desire for earth to remain sustainable:  “Klaatu meets with Mr. Wu (James Hong), another alien who has lived on earth for 70 years. Mr. Wu tells Klaatu that he has found the human race to be destructive and unwilling to change.  This confirms Klaatu’s experience so far, and so he determines that the planet must be cleansed of humans to ensure that the planet—with its rare ability to sustain complex life—can survive.” (From Wikipedia)

Finally, as a personal insight, I work in the power industry – fossil fuel, nuclear and power distribution. We also take on “green energy” wind farm projects.  I will say that fossil fuel and nuclear energy are equally God’s gifts to us just as water falling over a dam is or as wind now and then surging through a turbine (and BTW, killing American Eagles!).

The energy God has given us makes life sustainable for many years to come. And today’s science is making energy emissions safer and cleaner every day. Fracking is a good use of science to provide needed safe, clean energy to sustain life.

In God’s kingdom here on earth, let’s take care of our planet and give all glory and honor to God.  In doing so, dig into the science behind the headlines and the popular OTC books to verify what is true or not true.  I have seen some of the temperature recording stations and they cannot possibly supply accurate temperature readings.  And, more importantly, it is also now a well-known fact that ‘climate scientists’ have provided false, misleading information to support political agendas. They have even suppressed the truth under direction from their superiors.

Also, be aware of Climate Change Evangelist’s who want to tell you what climate change ‘means, “if”.’ Kingdom Venturers abide in Truth.

~Harold Lewis is Emeritus Professor of Physics, University of California: “Hal Lewis:  My Resignation from the American Physical Society”