Over the last several posts I’ve written about philosophers (Epicurus in particular and Protagoras) and philosophies (Epicureanism and Stoicism). Taken together they state, among other things I described earlier, that this life is all there is. There would be no hereafter in that way of thinking. During the first century the Apostle Paul, the “the apostle of the Gentiles”, encountered those worldviews on the streets where he sold his tents and in the early churches where he taught.

Writing to those in the Corinthian church whose Gentile members denied a resurrection of the dead, Paul responded in a rather taunting manner to their philosophical take on death as final. The gospel he proclaimed – Jesus is Lord, forgiveness of sins, new creation, the kingdom of God on earth has been launched – all hinged on the resurrection of Jesus.

And if the Messiah wasn’t raised, your faith is pointless, and you are still in your sins. 1 Cor. 15:7

After addressing and closing the dead are raised issue with an eye witness defense (1 Cor. 15: 3-8), Paul responds to the heart of the Corinthian objection to resurrection: the nature of future bodies. He mocks their materialist objections using an analogy from nature:

But someone is now going to say, “How are the dead raised? What sort of body will they have when they come back? Stupid! What you sow doesn’t come back to life unless it dies. 1 Cor. 15: 35

No doubt, Paul also heard that Jesus responded in a similar fashion when he rebuked the Sadducees who denied the resurrection (as recorded in Luke 20:38 and below, in Mark 12:

“Where you are going wrong,” replied Jesus, “is that you don’t know the scriptures, or God’s power. When people rise from the dead, they don’t marry, nor do people give them in marriage. They are like angels in heaven.

However, to show that the dead are indeed raised, surely you’ve read in the book of Moses, in the passage about the bush, what God says to Moses? ‘I am Abraham’s God, Isaac’s God, and Jacob’s God’? He isn’t the God of the dead, but of the living. You are completely mistaken.”

In the same letter (1 Cor.15:19), agitated Paul, in talking about people’s motivations in light of their position on the resurrection, recommends Epicurean self-pity if the dead are not raised.

If it’s only in this present life that we have hope in the Messiah, we are the most pitiable members of the human race.

…If the dead are not raised,

“Let us eat and drink,

for tomorrow we die.”

What was Paul’s background that offered him insight into Greek philosophies? We learn from Acts 21: 37 -39 as he defends himself against highly agitated Jews who clamored for his arrest.  He is brought before a Roman tribune:

“Am I allowed to say something to you??” he asked.

“Well!” replied the tribune. “So you know some Greek, do you? Aren’t you the Egyptian who raised a revolt some while back and led those four thousand ‘assassins’ into the desert?”

“Actually, replied Paul. “I am a Jew! I am from Tarsus in Cilica. That’s not an insignificant place to be a citizen of. Please let me speak to the people.”

Inferring his Roman citizenship, Paul goes on to defend his Jewish background in the face of his Jewish accusers:

“I am a Jew, he continued, “and born in Tarsus in Cilicia. I received my education here in this city, and I studied at the feet of Gamaliel. I was trained in the strictest interpretations of our ancestral laws and became zealous for God, just as all of you today.”

The narrative of the resurrection and an eschatology of the age to come took on great import during the Second Temple Judaism. Other than the words of Moses and some metaphorical allusions to resurrection by Isaiah (Isaiah 26:19) and Ezekiel (37), there isn’t mention of the resurrection in the Old Testament. Those allusions were applied during the Babylonian exile. They refer to the restoration of Israel as a nation and the reoccurring theme of exodus from bondage. The scribe Daniel is the first to mention the resurrection in non-metaphorical terms when he describes the “wise”, the Jewish resistance to Antiochus, not dying in vain (Daniel 11).

It was during the intertestamental period that scribes began writing about the resurrection of the dead, among many other topics of concern during late Second Temple Judaism. The Qumran community kept these writings in clay jars within caves in case the community was taken out by the Romans.

The Jewish religious leaders in Jesus’ time knew these writings, e.g., The Epistle of Enoch and 2 Maccabees. The disciples knew them. Paul knew them. The writings were talked about in the synagogues and on the streets. These writings offered a Messianic hope for the coming day when God would put things right. In the meantime, they stoked courage against the looming threat of Roman authority. It is very likely that Mary and Martha would have known about these writing as well. It appears that Martha had an understanding of them when she confronts Jesus after her brother Lazarus dies.

When Martha heard that Jesus had arrived, she went to meet him. Mary, meanwhile stayed sitting at home.

“Master,” said Martha to Jesus, “if only you’d been here! Then my brother wouldn’t have died! But even now I know that God will give you whatever you ask him for.”

“I know he will rise on the last day.”

(Notice the role reversals from the previous Mary and Martha encounter with Jesus in their home? Martha, the fussbudget homebody, is now interested to hear what Jesus has to say. She goes to meet him. Mary, who doted on Jesus at his feet, stays at home where she grieves and perhaps sulks that Jesus wasn’t there for her brother. She was given another chance at Jesus’ feet.)

“Yes, master,” she said. “This is what I’ve come to believe: that you are the Messiah, the son of God, the one who was to come into the world.”

Jesus responded to Martha’s eschatological understanding with, in effect, “I am revising your understanding with personal present tense knowledge of me”. Jesus then asks for Mary. Proximity to Jesus matters and not only for Mary and Martha’s sake but also for Jesus’ sake. He wants to see for himself the loss, the grief and the pain we feel. He would carry our griefs and sorrows to the cross and then remove the sting of death with his (and then our) resurrection.

When Mary came to where Jesus was, she saw him and fell down at his feet.

“Master!” she said, “If only you’d been here, my brother wouldn’t have died!”

When Jesus saw her crying, and the Judeans who had come with her crying, he was deeply stirred in his spirit, and very troubled…”

Mary and Martha witnessed the resurrection of their brother Lazarus. The three of them would learn of and perhaps be among the over five-hundred brothers and sisters who saw Jesus alive after his resurrection (1 Cor. 15: 5). All of them were witnesses of the things that came to pass. And what came to pass was not a doctrine or a philosophy or an apparition – a ghost. It was bodily resurrection.

No mere manmade philosophy, ancient or otherwise, could ever revive the dead or comfort the living in their loss with “Let us eat and drink, for tomorrow we die.” No amount of pleasure reduces the pain we feel. No amount of materialism and its cheerleading proponent Progressivism – a political pandering to self-pity – will provide hope for today. Those philosophical positions are about nursing wounds. Those philosophical positions are ephemera compared to the reality of the bodily Resurrection of Jesus and the new life offered to those who believe.

Only the Resurrection and the Life can reverse the downward spiral of mankind and provide hope that doesn’t pass away with a meal. Live in the present tense Resurrection and Life as Mary and Martha and hundreds of early followers of Jesus did. 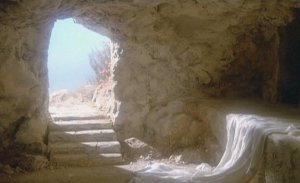 The Resurrection is the central theme in every Christian sermon reported in the Acts. The Resurrection, and its consequences were the “gospel” or good news which the Christians brought: what we call the “gospels,” the narratives of Our Lord’s life and death, were composed later for the benefit of those who had already accepted the gospel. They were in no sense the basis of Christianity: they were written for those already converted. The miracle of the Resurrection, and the theology of that miracle, comes first: the biography comes later as a comment on it. Nothing could be more unhistorical than to pick out selected sayings of Christ from the gospels and to regard those as the datum and the rest of the New Testament as a construction upon it. The first fact in the history of Christendom is a number of people who say they have seen the Resurrection.