A Feast for the Eyes

The account of a courageous woman named Esther as recorded in the Old Testament book by the same name, brings together the elements of anti-Semitism, ethnic ‘cleansing’, an assassination plot, of sexism, of civil disobedience, of speaking truth to power, of actions one woman takes to save her people, the Jews, from total annihilation. Most importantly, it is an account of a sovereign God keeping His covenant promise to Abraham-that His descendants would number as many as the stars.

We see in this story that God would not nor will He ever let His people be wiped from the face of the earth. God keeping His promises is God’s righteousness. And, even though we are unfaithful, God is faithful. His righteousness is ours for the beholding…

The Book of Esther never mentions God but God’s overarching sovereignty and His covenant promises for His chosen people inform, I believe, Mordecai’s motives and Esther’s actions. Esther does question her courage but God’s faithfulness is not questioned.

The Book of Esther recalls the events which occurred during the reign of Xerxes I, known as Ahasuerus in Hebrew. It covers a ten year span, 483-473 B.C.

Geography: The Book of Esther, Chapter One, verses 1 and 2 give us the details.

Xerxes “ruled over 127 provinces stretching from India and Pakistan to Cush (North Sudan). At that time King Xerxes reigned from his royal throne in the citadel of Susa (150 miles north of the Persian Gulf)…”

If you’ve got it flaunt it…

In the third year of his reign Xerxes decided to throw a whooper of a house party. His banquet was meant to show off his fine china and his collection of bling to the whole world. 180 days worth of his vast wealth was put on display. But that wasn’t all. Xerxes also wanted to display another ‘possession’-his Queen, Vashti. 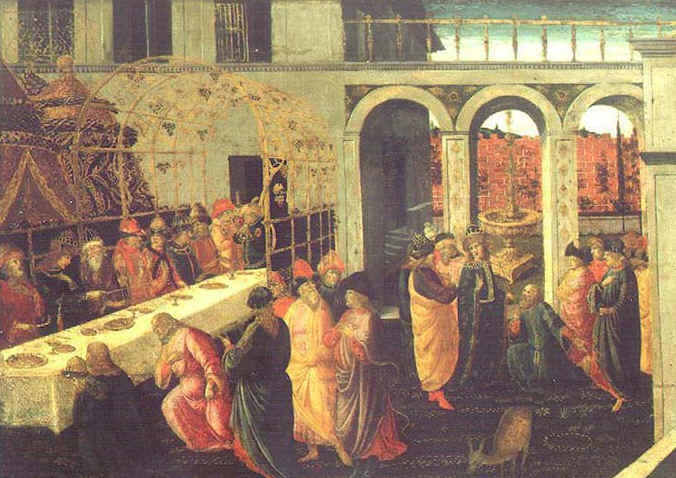 The account does not give the reason for Queen Vashti’s refusal to appear before Xerxes. Maybe she was having a bad hair day or maybe she didn’t like being put on display during the chattel call. Or, maybe, things between the king and queen went down just like they did on a certain Honeymooner’s episode. I’ll paraphrase:

Ralph (Xerxes) to Alice: “Remember Alice. I am the King of this household and you are nuttin’.

In any case the Queen’s reply to the king’s envoy of the emasculated seven (eunuchs that is) was, “No”. As you can imagine this answer did not go over well with Xerxes and did not bode well for the queen. Xerxes felt dissed before his previously wowed guests.

The wise men and nobles of his Xerxes’ court were summoned to court and asked “What response should be given to a Queen who refuses her king? Their reply: if this spousal refusal was found out by Xerxes’ subjects then all women would openly disobey their husbands-all hell would break loose (a KV paraphrase):

“This very day the Persian and Median women of the nobility who have heard about the queen’s conduct will respond to all the king’s nobles in the same way. There will be no end of disrespect and discord.”

The ‘wise’ men, those who were not physically eunuchs, decided that they would not be ‘emasculated’ by their own ‘disrespectful’ wives. So, using words that sounded like good political sense-keeping Xerxes kingdom under ‘proper’ social order and control-the wise men counseled Xerxes: Queen Vashti would be banished from his presence and then some.

These wise men also advised the king that a royal decree must be sent out, one that puts a finger in the dam of rebellion control. The king liked this advice and issued the edict: “every man should be ruler of his own household.”

Now, before all this falderal I would have recommended a little one on one communication with Queen Vashti before listening to the “yes”-men’ wise guys. I would also have recommended that king and queen read the original Love Language book, Solomon’s The Song of Songs. But that is not what happened. Protocol and paltry patriarchy gave way to punitive separation.

As you know, one bad decision easily leads to another. The queen was banished from Xerxes presence forever-a new law written into the books for Persia and Media. Then, Esther Chapter 2 tells us that the king’s personal attendants suggested a beauty pageant of virgins to ‘assuage’ the King’s rueful heart. You see, Xerxes later regretted his decision. Men!

Here’s the good part: God’s sovereignty, regardless of bad men, bad advice and bad decisions does not affect God’s righteous purposes. They are rerouted through the king’s heart.

“In the LORD’s hand the king’s heart is a stream of water that he channels toward all who please him.” Proverbs 21:1. Wisdom always trumps folly.

Once again, Esther Chapter Two: Under the king’s command the chief eunuch, Hegai, was told to assemble beautiful virgins from every province into a harem at the citadel of Susa. These women were given an exclusive salon and spa treatment. It was figured that one of these select beauties women would replace the banished Queen Vashti. It is at this juncture that we meet another main character, Mordecai, a Jew of the tribe of Benjamin or, rather, wisdom and love personified.

“Mordecai had a cousin named Hadassah, whom he had had brought up because she had neither father nor mother. This girl, who was also known as Esther, was lovely in form and features, and Mordecai had taken her as his own daughter when her father and mother died.” (The Book of Esther Chapter 2, vs. 7)

“I’m in heaven.” Esther quickly got Hegai’s attention She pleased him, winning his “favor”. Immediately she was put on a very short list of one contender. To channel things in the King’s direction, Hegai assigned to Esther seven select maids. He also gave her the royal salon treatment and put Esther and the seven maids into the best place in the harem.

Now the story and the “stream of water” begin to flow down a unexpected course, a fast-tracked one of God’s veiled purpose, the ramifications of which lead to a crisis of conscious for everyone involved including Esther.

Esther had not revealed to anyone her family background-she was Jewish. Mordecai had forbidden her to do so. In the days ahead Mordecai would keep close tabs on Esther, his beloved foster ‘daughter’. I believe Mordecai knew that Esther would fill a position in history that he as a man could not.

Esther was now neck (and face) deep into it. Court protocol demanded that any ‘girl’ who would appear before the king must beforehand undergo twelve months of beauty treatments-six months with oil of myrrh and six months of with perfumes and cosmetics. Henna for Hadassah? Probably.

The Match dot-Harem protocol of separating the sheep from the goats:

“And this is how she was to go to the king. Anything she wanted was given her to take with her from the harem to the king’s palace. In the evening she would go there and in the morning return to another part of the harem to the care of Shaashgaz, the king’s eunuch who was in charge of the concubines. She would not return to the king unless he was pleased with her and summoned her by name.” (The Book of Esther Chapter two, vs. 13-14)

“Held” from Awaken by Natalie Grant.