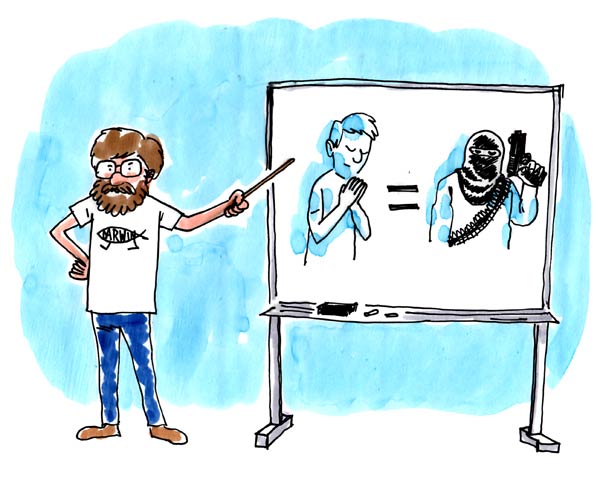 The moral mixups of angry atheists

“The “New Atheism” movement was launched as a direct consequence of the attacks of September 11, 2001.”

This is the opening statement of the Prologue from Why Science Does Not Disprove God by Amir D. Aczel, PH.D.

According to Dr. Aczel, religion and the acts of militancy creating the carnage of the 9-11 attacks are the raison d’etre for the New Atheists and for their haranguing believers in a God:

“New Atheism is combative, aggressive, and belligerent against people of belief.  Its proponents hold that religion is evil, and they state this belief loudly and clearly. Whether they are scientists or not, the new atheists frequently employ science as their tool.”

If you have listened to talks or read the books by the New Atheists Richard Dawkins and the late Christopher Hitchens, among others, you might come away with the conclusion that science had disproved a need for God.

Restating Dr. Aczel in a familiar art format, the New Atheists have created a collage of “supporting” scientism.  First they used bits and pieces of biology and evolution that were familiar to them.  Then, they pasted on clippings of quantum mechanics theories.  And now they are using a splatter technique, throwing infinite unknown universes with their infinite probabilities at the canvas to finish their collage.

All together I would call this hodgepodge work of Pop Art “The Atheist Delusion”.

The New Atheist’s debate diatribes, their dysfunctional use of science, their avoidance of archeological findings and their animus towards believers in a God are addressed by Dr. Aczel in his book.

From the Introduction, we read of Dr. Aczel’s authenticated cri de coeur:

“The past few years have seen the rapid growth of the idea that God and Science cannot possibly coexist….The purpose of this book is to defend the integrity of science.”

Dr. Aczel knows first-hand the New Atheist’s agenda, via debating with them:

“And these New Atheists—Richard Dawkins, Lawrence Krauss, the late Christopher Hitchens, Sam Harris, and Daniel Dennett”—are bound together under a powerful common purpose, and continually reinforce each other.  The problem with the science in the books and lectures of the New Atheists is that it is not pure science—the objective pursuit of knowledge about the universe.” Rather, it is “science” with a purpose” [I call it “scientism,” as do others]: the purpose of disproving the existence of God.” (emphasis added)

Something to think about:

What do the ancient Greek “atomist” philosophers (circa 460-270 BC) like Epicurus and Democritus and the On Origin of the Species author Charles Darwin and the New Atheists have in common?

There are at least three issues that frame the writings and dialog of each subset:

1-All of them had the notion that no Supreme Being would exist that would allow judgment and eternal punishment. For example…

Charles Darwin: “I gradually came to disbelieve in Christianity as divine revelation”; “The plain language of the [biblical] text seems to show that men who do not believe and this would include my Father, Brother and almost all my best friends, will be everlastingly punished.  And this is a damnable doctrine.”  -Chapter Eight, “Triumph and the Reversal of

The New Atheists, speaking as gods, posit that no Supreme Being would ever judge mankind or let evil enter our world.  (They are OK, though, with an Epicurean “free will” attenuated by evolution and Social Darwinism and with ignoring murderous dictators, genocide, eugenics, abortion, Stalin, Pol Pot, Mao, etc.-all the “damnable” by-products of atheism and Social Darwinism.)

2-All of them used unscientific analogs and personal anecdotes (feelings) to create their “empirical” disavowal and disapproval of God’s existence. There are too many references to list all of them here.

“The trouble with [Darwin’s] Descent [of Man] really starts in chapter 5, “On the Development of the Intellectual and Moral Faculties during Primeval and Civilized Times.” It is a mass of generalizations.”

According to historian Paul Johnson, Charles Darwin made statements in The Descent of Man and elsewhere that would be considered highly racist, chauvinistic and speculative today.

“Like Dawkins, Hitchens also uses anecdotes from his own life to illustrate the overwhelming viciousness he sees in all religions:” (Dr. Aczel goes on to quote Hitch’s church memories.)

Feelings and sentimentality do not a scientist make.

The New Atheists, from railing on and on about the Crusades and Catholic Priest child abuse to denigrating Mother Teresa to childhood church memories, hope to poison the well of Living Water that a Samaritan women would drink from.

3- None of the above studied anthropology, metaphysics, archeology and mathematics. Instead, they read the tabloids.  They wanted to know what people thought about them. Darwin held off publishing On Origin of the Species due to his concern over public opinion.

Dr. Aczel states that atheism began with the “Atomist” philosophers. This is not so.  Atheism is a post-Christian phenomenon. The Epicureans mentioned above believed in Roman and Greek deities, to be sure, but they felt that those deities where busy off somewhere else and were always angry with mankind, anyway.  So, they chose to ignore those gods.

One final note about the book:

Dr. Aczel, as his book clearly reinforces, reasons scientifically that there is a God-in the “broadest possible sense.”  But, Dr. Aczel makes no claim saying that God is a personal God or, say, as Francis Schaeffer, founder of L’Abri said in his writings and lectures that, “God is Infinite-Personal”.  Dr. Aczel’s book, one could say, is purely academic…and scientifically supports Theism.

Amir D. Aczel holds graduate degrees in mathematics. He is also the author of Fermat’s Last Theorem. In Why Science Does Not Disprove God he notes a significant array of distinguished scientists interviewed in the process of writing his book. And, here are the chapter titles to pique your interest:

Prologue:  The Birth of the New Atheism

1-The Coevolution of Very Early Science and Religion

2-Why Archaeology Does not Disprove the Bible

3-The Revolt of Science

4-The Triumphs of Science in the Nineteenth Century

5-Einstein, God, and the Big Bang

6-God and the Quantum

7-The “Universe from Nothing” Deception

8-And on the Eighth Day, God Created the Multiverse

10-Catastrophes, Chaos, and the Limits of Human Knowledge

11-Between God and the Anthropic Principle

12-The Limits of Evolution

15-Conclusion:  Why the “Scientific” Argument for Atheism Fails

Below, the Hebrew King David (c. 1040–970 BC) speaks about a morally perverse person, an ungodly person, and one who disregards God and any thought of moral adjudication (see above for the modern folly version by the New Atheists). David is not talking about theoretical atheism. The Apostle Paul later references Psalm 14 in his letter to the Roman church (Chapter 3) when talks about the nature of sin:

“For the choir director: A psalm of David. Only fools say in their hearts, “There is no God.” They are corrupt, and their actions are evil; not one of them does good!”  Psalm 14:1