“Dover Beach”, Matthew Arnold’s lyric poem, describes the shore at the narrowest part of the English Channel. Dover, on the southeast coast of England in the county of Kent, is famous for its white cliffs and its popular ferry port. The ferry crosses the Strait of Dover to Calais, France. Dover Beach is where Arnold honeymooned. His poem reveals that he also thought about life in the mid 1800’s. 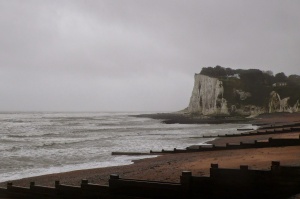 “Dover Beach”, with imagery of the restless sea and allusions to Ancient Greek Figures, is a metaphor for the ebbing of Christian faith and the surge of the industrial age sensed by Arnold. Mankind is moving away from the community and the collective experience which fosters faith and finds itself “as on a darkling plain” without solace.  The poem was written around 1850.

Further Context:  T.S. Eliot’s The Waste Land, also filled with allusions to the collective past, was published in 1922. Eliot is considered the first true modernist in English literature. Eliot’s spiritual quest ended when he embraced the Anglican Church.

The sea is calm to-night.

The tide is full, the moon lies fair

Upon the straits; – on the French coast the light

Gleams and is gone; the cliffs of England stand,

Glimmering and vast, out in the tranquil bay.

Come to the window, sweet is the night-air!

Only, from the long line of spray

Where the sea meets the moon-blanch’d land,

Listen! you hear the grating roar

Of pebbles which the waves draw back,and fling,

At their return, up the high strand,

Begin, and cease, and then again begin,

With tremulous cadence slow, and bring

The eternal note of sadness in.

Heard it on the Aegean, and it brought

Into his mind the turbid ebb and flow

Of human misery; we

Find also in the sound a thought,

Hearing it by this distant northern sea.

The Sea of Faith

Was once, too, at the full, and round earth’s shore

Lay like the folds of a bright girdle furl’d

But now I only hear

Retreating, to the breath

Of the night-wind, down the vast edges drear

And naked shingles of the world.

Ah, love, let us be true

To one another! for the world, which seems

To lie before us like a land of dreams,

So various, so beautiful, so new,

Hath really neither joy, nor love, nor light,

Nor certitude, nor peace, nor help for pain;

And we are here as on a darkling plain

Swept with confused alarms of struggle and flight,

Where ignorant armies clash by night.

A world of “neither joy, nor love, nor light” …
The character Montag, in the novel Fahrenheit 451, reads the last two stanzas of Arnold’s poem to Mildred, his wife, and her female friends. He attempts to expose their shallow nature. Mildred cautions him not to do so:

After much resistance, Montag goes on to read the last two stanzas, finishing with

And we are here as on a darkling plain

Swept with confused alarms of struggle and flight,

Where ignorant armies clash by night.

To those who have ears to hear…

Fahrenheit 451 (1966), at 58 minutes, Montag quotes another book’s passage out loud to the unwilling (and yes, the acting is atrocious):