“…Cynicism and sentimentality are two ways in which things of value are demoted to things with a price.

“To understand this we need to make a distinction between fantasy and imagination. Both fantasy and imagination concern unrealities; but while the unrealities of fantasy penetrate and pollute the world, those of the imagination exist in a world of their own, in which we wander freely and in full knowledge of the really real…Fantasy covets the gross, the explicit, the no-holds-barred display of the unobtainable; and in the crisis of display the unobtainable is vicariously obtained.”

One aspect I derive out of the above quote is that there is a Wow! that is not wonder. Fantasy, I’ll label here as “the Wow! that is not wonder”, intrudes on our daily life. We allow it to. We do so, I believe, out of a boredom with life, a boredom sustained by a laziness which suppresses the exercise of curiosity that develops a healthy awe and wonder. In the place of applying oneself to reaching higher and beyond one’s self is down and dirty titillation’s instant gratification. Those in the thrall of fantasy, the “walkers”, need a constant diet of fresh fantasy to devour. Philosopher Scruton, in the same chapter as the above quote, provides an example of the “imaginary object which leaves nothing to the [ethical-life sustaining] imagination”. He offers a comparison, noting the queue outside Madams Tussaud’s Wax Museum in London and the queue outside the National Gallery:

“No effort of the imagination is required to understand a wax work. It stands amid the wash of easy sentimentality, and is never eroded. It is the paradigm fantasy object; absolutely lifelike, and absolutely dead. Through the work of art, by contrast, we encounter a world of real, vulnerable and living people, which we can only enter by an effort of the imagination, where we, like they, are on trial.”

We are content to sit in front of a TV and to be mesmerized by Computer Generated Images. Comic book superheroes smash all sorts of bad guys and save the planet from other bizarre characters gone bad. Apocalypses of every kind, from earth-colliding meteorites to earthquakes to tsunamis to you-name-it-complete-devastation, is served up in order to rivet the audience to a we-are-in-this-together shared fantasy. The intruders we allow into our dumbed down subconscious also include impossible driving-on-the-edge-car chases, extreme violence, explicit pornography, perverse lewdness, vulgarity, cheapness and a host of other “for sale” excitations “walkers” must purchase to feed on.

As a follower of Christ in the Kingdom of God on earth, I fully expect unbelievers, the walking dead, to feed on Epicurean pleasures. What I don’t expect is that Christians, those alive in Christ, doing the same. When Christians purchase with Kingdom resources and live on food which does nourish the imagination, the world sees no difference between fantasy and imagination or, more importantly, between Christian and the walking dead.

This past year I have written posts attempting to prod those in the Kingdom of God towards awe and wonder. I see the Christian’s neglect in exercising his or her imagination and its required disciplined study of the surrounding cosmos as deplorable. There is so much in the universe that awaits our discovery, yet, we are content to feel something, be it raw excitement, instant righteous anger, CGI generated hope, blithe sentimentality and more, in our increasing moments of boredom

How can one be bored? God has given us two books: Nature and Scripture. There is so much to explore in both. There are mysteries that need discovery by you. And, if you think you know Scripture because you know the four spiritual laws and a few verses which look nice on pictures of cute animals, think again.

Almost daily, as I engage in Twitter, I come across those who question the existence of God. I debate them with a desire not to ‘win’ the argument but to impart knowledge which I hope and pray leads the atheist and the agnostic to question their position and to look further. To debate them I have to study aspects of Scripture, science, philosophy. I have to be well-read.

As I debate there are typically no other Christians who jump in to augment the case for Christ. If they do it is usually with Scripture which is tangential to and not on the point being discussed. In other words, where are Christian’s minds? Vacationing on Fantasy Island? “The harvest is great, but the laborers are few…” I agree with St. Augustine regarding interpreting and positing Scripture to support things you do not understand. (see quote below).

As I see it the church has been passive and reticent to go deep and to reach higher. Many sermons relate illustrations from current movies and not from scientific findings, philosophy or from works of art or music or literature. Beyond Christian colleges which offer scholarships are there any churches that are currently offering funding for scientific research or science scholarships for a congregant? To be sure church donations go to missionary work and to social causes. Yet the Kingdom of God, I believe, demands more of us than translating the four spiritual laws into another language. The Kingdom of God demands more of us than picking a political sideline. 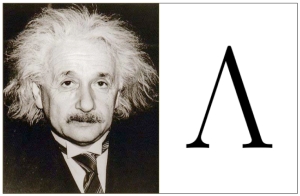 Looking up from the quotidian things of life, I find all kinds of things to marvel at. A sky that is blue, a sunset that is red, a night sky filled with diamonds in the works. Wonder and mystery fill our expanding and accelerating out-to-infinity cosmos. Einstein added the Cosmological Constant λ to his General Theory of Relativity because there was a factor at work in the cosmos which is still unknown.

As I read “God’s Equation: Einstein, Relativity, and the Expanding Universe” by mathematician Amir D. Aczel this past week I was reminded of Einstein’s thought experiments or, as they have been called, “theoretical experiments-in-imagination”. Einstein imagined light traveling thought the cosmos. He also imagined what different observers would see when two trains passed each other. These deliberate intellectual speculations would later spur world-renowned theories, theories that were later proven true through astronomical observations. (Among other things, the church needs to operate observatories or at least buy telescopes! The Book of Nature needs to be read also!)

Finally, is this how faith works, by giving us conviction about things we can’t see? When the Wow! that is wonder is exercised, the unobtainable becomes obtainable? If so, then it seems to me that prayer in the closet is the de-fantasied realm for a Christian’s thought experiments.

-Saint Augustine (A.D. 354-430) in his work The Literal Meaning of Genesis (De Genesi ad litteram libri duodecim) regarding interpreting Scripture in the light of scientific knowledge.

“Usually, even a non-Christian knows something about the earth, the heavens, and the other elements of this world, about the motion and orbit of the stars and even their size and relative positions, about the predictable eclipses of the sun and moon, the cycles of the years and the seasons, about the kinds of animals, shrubs, stones, and so forth, and this knowledge he hold to as being certain from reason and experience. Now, it is a disgraceful and dangerous thing for an infidel to hear a Christian, presumably giving the meaning of Holy Scripture, talking nonsense on these topics; and we should take all means to prevent such an embarrassing situation, in which people show up vast ignorance in a Christian and laugh it to scorn. The shame is not so much that an ignorant individual is derided, but that people outside the household of faith think our sacred writers held such opinions, and, to the great loss of those for whose salvation we toil, the writers of our Scripture are criticized and rejected as unlearned men. If they find a Christian mistaken in a field which they themselves know well and hear him maintaining his foolish opinions about our books, how are they going to believe those books in matters concerning the resurrection of the dead, the hope of eternal life, and the kingdom of heaven, when they think their pages are full of falsehoods and on facts which they themselves have learnt from experience and the light of reason? Reckless and incompetent expounders of Holy Scripture bring untold trouble and sorrow on their wiser brethren when they are caught in one of their mischievous false opinions and are taken to task by those who are not bound by the authority of our sacred books. For then, to defend their utterly foolish and obviously untrue statements, they will try to call upon Holy Scripture for proof and even recite from memory many passages which they think support their position, although they understand neither what they say nor the things about which they make assertion.” [1 Timothy 1.7]

“Testify to Love” from Testify To Love by Avalon.