The recent tragic events in Florida have elicited cries for action to be taken by those in government. But is government involvement the answer? And who is to blame for what happened? Are we corporately responsible for what an individual does?

Let’s start with my estimation of what our U.S. government’s interface with us should entail before immediate demands are made on it. The secular state, otherwise known as government, should be limited in size and scope of power. It should provide order, transportation infrastructure, protection from foreign enemies, border protection, and enforce contracts. Beyond that a secular state should not have duties including any onus to hand out subjective rights that benefit only certain groups and health care. The secular state, by its very impersonal nature, is not to decide who is more equal than others nor to be given charge of care for others or to become a brother’s keeper.

The peoples of a secular state should look to government as the enforcer of order. Yet, its powers are limited and rightfully so in our free society. In the matter before us, the FBI, a law enforcement agency, knew about Nick Cruz’s online behavior. But what could the FBI do about such knowledge except to keep an eye on Nick from a distance? Free speech allowed Nick to post what he wanted on YouTube. In fact, Nick’s freedom, our freedom, was what allowed him to do evil.

There are earnest protestors demanding more gun control laws from the government. They are sincere in their demands for a response. Some protestors, though and as we have witnessed before, are likely paid-for protestors from out of town. There are those with money (e.g., Bloomberg and Soros) who want to rile up protestors to get their way inculcated into our laws. Their way involves restricting even more freedoms but does not address the underlying problem. The real problem is evil.

At the beginning of our nation it was understood by those involved that “Liberty cannot be established without morality, nor morality without faith.” (Alexis de Tocqueville) But today, we as a nation have since walked away from morality and a faith in God’s sovereignty. We have instead put our trust and faith in collective sovereignty – “We the people” government. In this milieu we expect government to be omniscient and omnipotent and controlling with respect to others but not with respect to ourselves.

Where should our focus be? Should we focus on increasing the size of government until all freedoms once taken from your neighbor are repurposed and are now taken from you? How do we address things beyond our control and outside a limited control of government?

If evil in society is the absence of good in society, then good must return in full force. Christians are exhorted in Scripture (Romans 12: 21) “Don’t let evil conquer you. Rather conquer evil with good.”

Is what I am positing above a simplistic and pedantic answer? No, I don’t think so. Actually, throwing more gun control laws on the books is as simplistic as it gets. It is using “the rod and staff” of ‘good shepherd’ government to bash other sheep into submission. But the problem of evil lurks in the bushes ready to leap. So, how do we address evil in our land?

Prayer. Yes, prayer. I know, there are some who think prayer is not taking action. I have debated those people on Twitter, as well. There are Progressive Catholics who see social justice action as the epitome of Catholicism (along with bits of Contemplation). Prayer is not weakness, or inaction. Prayer taps into the resurrection power of God, the power that destroyed evil’s power over us forever. 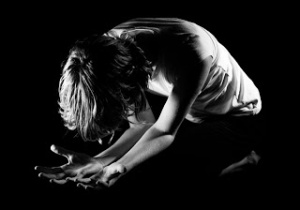 Do you want to restrain evil in this world? If so, then pray. When we pray we invoke our faith and trust in God’s sovereignty. In fact, the only way to deal with the horror and confusion of evil is to turn to God. The only way. And when we pray as Followers of the Way in the Kingdom of God on earth we stand between heaven and earth pleading and groaning with all creation. We bring to God the pain, the hurt, the sorrow, and the deepest longings of the world. The Searcher of Hearts knows the mind of God and knows our hearts. The Searcher lifts our prayers to the Father who then acts in accordance with His goodness.

On a related matter, I will say more in a future post about how we should love and care for our physical neighbors and not do so vicariously through government programs. It takes you to be a neighbor. Neighbors understand brokenness caused by evil than evil itself. Nikolas Cruz was, by several accounts, a troubled and depressed young man before he acted. The mother who adopted Nikolas died of pneumonia Nov. 1, leaving him without parents. He stayed briefly with a family friend but wanted to move on. For now, though, I will share with you how I am praying against evil and for the good of my neighbors.

Not long ago I found out that down the street from where I live a man was robbed of his wallet at gunpoint. This occurred in the parking lot of a Section 8 apartment housing complex. I also learned that heroin deals we going down in that same government housing project. Drug use might explain the recent armed robberies of banks also down the street from me. I am praying that God would restrain the evil from taking hold in my community. I am praying that no one will be robbed or accosted by druggies. I am praying that law enforcement will be able to monitor the situation and catch evil in the act. I am praying for LE’s safety. I am praying that those involved in crime and those around crime will, by the Holy Spirit, be convicted of sin, of righteousness and judgment. The ruler of this world is judged already and I am enforcing that verdict. (see John 16: 8-11)

There is too much to say in this one post. There are too many threads I could pull on. But I hope I asked questions to spur your thinking as to how to relate to the problem of evil. Evil is all around us, even on days where there are no monstrous crimes committed. As Followers of Jesus we must appropriate God’s good through prayer and conquer evil as it lurks waiting to pounce. The world will turn to more and more government to please itself and to protect itself. But, regarding evil and all else, the Church must turn to God in prayer. God’s vantage point is needed, along with full body armor.

“What else is there to say? Just this: be strong in the Lord, and in the strength of his power. Put on God’s complete armor. Then you’ll be able to stand firm against the devil’s trickery. The warfare we are engaged in, you see, isn’t against flesh and blood. It’s against the leaders, against the authorities, against the powers that rule the world in this dark age, against the wicked spiritual elements in the heavenly places.” The Apostle Paul writing to the churches in Ephesus, 6: 10-12

Added 2/19/2018. Here‘s a partial solution – Gun-violence restraining orders (GVROs) – to guns used for violent means. The solution supports what I said about “neighbor” involvement above and due process:

A Gun-Control Measure Conservatives Should Consider

If this report checks out, then — combined with all the missed warning signs — I truly can’t think of a more shameful law enforcement failure in modern American history. pic.twitter.com/M48S3tUxkN

The Associated Press on Friday obtained a transcript of the Jan. 5 tip to the FBI’s call center. The FBI acknowledged it failed to investigate the tip about 19-year-old Nikolas Cruz, but the transcript provides the fullest glimpse yet into the seriousness of the woman’s concerns.
“I know he’s going to explode,” she told the call-taker.
The FBI briefed congressional staff Friday about its failure to act on the alarming tip, as well as why it did not delve into a September 2017 YouTube comment posted by a “Nikolas Cruz” that said, “Im going to be a professional school shooter.”

“A gun-violence restraining order (GVRO) is a remarkably simple and precisely targeted remedy for two forms of gun violence — mass shootings and suicides. As Chris Cox explains, it allows a defined group of people (usually family members, school principals, employers) to petition a local court for an order temporarily removing guns from a person who’s made statements or exhibited behavior indicating they’re a threat to themselves or others.
To be constitutional, a GVRO should require that the petitioners (those seeking the order) come forward with admissible evidence, it should grant the gun owner a prompt hearing, and it should provide a right of appeal. The best GVRO statutes will be drafted with the help and cooperation of the NRA, which will ensure that the statutes aren’t overbroad and will minimize the chances of abuse.”

6 thoughts on “Groans are Many, Hearts are Faint”