Three scenarios, two Marys, and only one thing matters:

Jesus’ parents used to go to Jerusalem every year for the Passover festival. When Jesus was twelve years old, they went up as usual…

After the festival, Joseph and Mary left Jerusalem for their home in Galilee. They went on for a day’s journey thinking the boy was with the traveling party. But Jesus had remained in Jerusalem. When it was discovered that Jesus was nowhere to be found, Joseph and Mary returned to Jerusalem. There, they found the boy in the temple courts sitting among the teachers. He was listening to them and asking questions. Those who heard him were astonished at his understanding and his answers. And the teachers were not the only ones who were taken aback. When Joseph and Mary saw the boy they were quit overwhelmed.

“Child,” said his mother, “why did you do this to us?” Look—your father and I have been in a terrible state looking for you!”

“Why were you looking for me?” he replied. “Didn’t you know that I would have to be getting involved with my father’s work?”

It appears from Luke’s Gospel text that Joseph and Mary assumed that the boy Jesus was mature enough to make his way home within the traveling party and without oversight. Maybe at that time Mary was caring for or carrying another child. Chasing a twelve-year-old boy around would have been too much.

What we do know is that Mary did keep track in her heart of what the angel had said to her before her pregnancy. No doubt she also remembered that she and Joseph had escaped the rage of a king. And, she must have told Luke after the resurrection and ascension that the boy Jesus was “full of wisdom, and God’s grace was upon him.” (Luke 2: 40). Yet, with such unique events (including wise men appearing) surrounding the child, I wonder why a closer eye wasn’t kept on the boy. It appears that Mary did not comprehend Jesus.

One observation, based on this early account of Jesus’s life, is that Jesus isn’t in the ‘business’ of making people, his own parents in this case, feel OK about him. His parent’s assumptions, in fact, had them carry on thinking all was well. But the harsh reality had them turn around and look for Jesus.

It is said that Saint Teresa of Avila once remarked to the Lord, regarding not being OK with how he treated her, that, “If this is the way you treat your friends, it’s no wonder you have so few!”

Roughly eighteen years after Joseph and Mary catch up to Jesus, Jesus and Mary attend a wedding in Cana. Mary invokes mother privilege when the wine runs out. What prompted her to think Jesus should do something about empty wine glasses? Did she remember boy Jesus asking, “Didn’t you know that I would have to be getting involved with my father’s work?” Had she seen Jesus perform other such miracles? Was she simply trying to get him involved in procuring more wine for the wedding feast? I assume that Mary, like most mothers, was concerned about guests being taken care of. The wedding invite likely meant that she was close to the wedding family. In any case, mother gets involved…

Jesus’ mother came over to him.

“They haven’t got any wine!” she said.

“Oh, Mother!”, replied Jesus. What’s that got to do with you and me? My time hasn’t come yet.”

The apostle John records (Chapter 2) Jesus’ act of transubstantiation — turning water into wine — as the first sign of Jesus’ public ministry. The One who is involved with his Father’s work knew that once the signs of his kingdom had begun publicly, that everything would change. It would be the end of a quiet family life. The public ministry would involve throngs of people around him. It would involve choosing disciples from the locals and spending three years in their company. It would involve facing down all the powers in heaven and on earth. It would involve the ultimate sacrifice, his death on a cross.

Mary did not see this coming. She only saw in Jesus what most Jews had hoped for – a promise come true, a covenant kept, a prophet, a teacher and, a triumphant Messiah — one who came and conquered. The Jews of the first century believed a Messiah would come to save God’s people. Going up to the Passover festival every year would reinforce that thinking. Their Deliverer was coming. It was Mary who said, [God] “has rescued his servant, Israel, his child, because he remembered his mercy of old…”.

The Jews assumed that this Messiah would be a special human, a “full of wisdom, and God’s grace was upon him” human. They assumed wrong. And, when the wine ran out, did Mary assume that she could force Jesus to deliver the goods and reveal himself to the world? Others would later demand a sign from Jesus (Matthew 12:38).

One observation, based on this account of Jesus’s life, is that Jesus isn’t in the ‘business’ of making people, his own mother in this case, feel OK about things. Mary’s assumption, in fact, likely had her thinking all will be well if Jesus just does what she asked of him. Wine glasses were empty and more wine was needed immediately for the celebration to continue. An honest need. But, more wine depended on the Father. Listening to the Father was the only thing that mattered to Jesus.

On their journey, Jesus came into a village. There was a woman there named Martha, who welcomed him. She had a sister named Mary, who sat at the master’s feet and listened to his teaching.

Martha was frantic with all the work in the kitchen.

“Master,” she said, coming in to where they were, “don’t you care that my sister has left me to do the work all by myself? Tell her to give me a hand!”

“Martha, Martha,” he replied, “you are fretting and fussing about so many things. Only one thing matters. Mary has chosen the best part, and it’s not going to be taken away from her.”

A Proverbs 31 woman and host has major setbacks when that woman is determined to lord her peace of mind over another. That was what Martha sought to do to Mary. Martha assumed that her demands would be met. She assumed that the Lord would put Mary in her place – the woman’s space. I think it is safe to assume that Mary was sitting at Jesus’ feet listening to Jesus as he talked to Mary’s brother Lazarus, as they sat together in the men’s space.

We are told in John’s gospel account chapter 11: 2 that this Mary was the same Mary who would anoint the feet of Jesus with myrrh and then wipe them with her hair. Listening to Jesus and then responding to him with extravagant love defines the ultimate woman and more than Proverbs 31 could ever do. 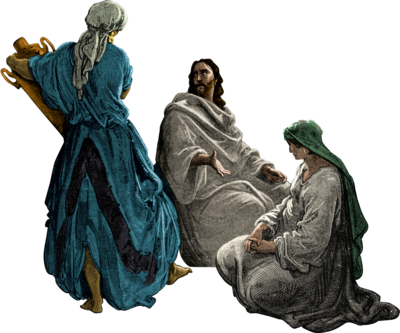 There is only one thing that matters and we see it restated in the three scenarios above. First, Mary and Joseph find the missing boy Jesus instructing the teachers in the temple. Those who heard the boy Jesus were astonished at his understanding and his answers. Second, Mary tells the servants at the wedding to listen to Jesus. And finally, Jesus honors Mary because she is listening to him.

If you think you know what Jesus would do, you don’t. You begin to know him as you listen to him and not to your assumptions about him. To listen to him means to be at his feet without your Smartphone assumptions. Choose “the best part” and not frantic fussy fretting. Choose the one thing that matters and you won’t lose it, empty it and, it’s not going to be taken away from you.

“Held” from Awaken by Natalie Grant.