The unjust cry out for revenge justice: “No Justice, No Peace!

Feminists rally for Pro-choice justice: “Abortion is a Civil Right!”

The LGBT coalition demands lifestyle justification justice: “We demand equality and not your approval!”

Environmental advocates seek justice “against the onslaught of oppressive toxins and toxic oppressions that threaten to submerge out homes!”

Parents call for education justice: “No Child Left Behind!”

It would appear, looking at just a sampling of recent events, that we have been created by God with a need for justice. There seems to be within us a deep-rooted desire for things to be put right. And because things are not right in our eyes, there is a constant clamor for resolution. Humanity longs to be restored and reassured among the inhuman events occurring every day. Yet justice, in a world of people dehumanized by sin, is often abstracted and ad hoc, and even beastly. And for many today, human rights have morphed into individual rights to justify inhuman behavior.

When man’s justice bypasses deliberative and evidence-producing due process it has deteriorated into kangaroo courts, lynch mobs, mob rule, vigilantism, Cain-killing-Abel retribution and whatever feeds the beast within with power. Diametrically opposite of man’s degraded justice, God’s justice is not a knee-jerk reaction. Rather, it is consistent with God’s character which God has made know to us. Mercifully and within the surety of God’s name, God’s justice is also restorative and humanizing. It is universal and fair – it applies to everyone for all time. And, it includes due process and evidence.

Therefore judge nothing before the appointed time; wait until the LORD comes. He will bring to light what is hidden in darkness and will expose the motives of the heart. At that time each will receive their praise from God. -the Apostle Paul, 1 Cor. 4:5

For the word of God is alive and active. Sharper than any double-edged sword, it penetrates even to dividing soul and spirit, joints and marrow; it judges the thoughts and attitudes of the heart. – the letter to the Hebrews 4:12

Not only does God’s word go to the heart of the matter, Scripture gives us the means to learn of God’s character and the nature of His justice. Scripture reveals God’s justice in history and God’s justice to come.

With dreams and vision, the books of Daniel and The Revelation of Jesus Christ graphically depict the beastly empires and their beastly rulers. The empires and their rulers do not acknowledge God as sovereign. When they do they oppose God. Both books describe in vivid detail God’s justice in dealing with the de-humanized beasts in the world. 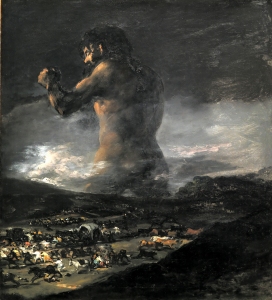 In 587 BCE king Nebuchadnezzar and the ruthless Babylonians conquered and pillaged civilizations. The king’s army captured Jerusalem and plundered the temple. Israelites were taken into exile in Babylon, a city which historically and metaphorically represents a center of man’s opposition to God.

Daniel’s account describes the exiled Israelites being commanded by the king to pay homage to that which isn’t God. Implied in the account, the four Israelites had been taught early on about the One True God and that idolatry was forbidden. They understood from reading the Psalms (115:8) that those who worship idols become like the idols – inhuman.

Those who make them will be like them, and so will all who trust in them.

Daniel and his three friends are told they must worship a towering gold statue of king Nebuchadnezzar. They resist, making it clear that that they “walk in the name of the Lord our God”. God saves them and vindicates their stance. From this episode we learn that God vindicates those who wait for his justice. Again, the Psalms provided their pleadings:

Vindicate me, O LORD, for I have walked in my integrity, And I have trusted in the LORD without wavering.  Psalm 26:1

Vindicate me, O God, and plead my case against an ungodly nation; O deliver me from the deceitful and unjust man! Psalm 43:1

God’s sovereign justice is revealed to king Nebuchadnezzar in a vivid and perplexing dream about a statue. Daniel’s God-given interpretation describes the king as the statue’s head of gold. The statue’s body is made up of different material elements each representing different kingdoms. In the dream the kingdoms come and go. Daniel goes on to say that an everlasting kingdom – the Kingdom of God – will not be crushed but “it will crush all these kingdoms” and “will endure forever” (Daniel 2).

In Daniel 3 we learn that the king hasn’t learned a thing from the dream or about the One True God other than Daniel’s God is just another god to be respected. The king goes on to create an enormous image of gold. He demands for it to be worshipped like a god.

Daniel 4 records the king’s vision. Another interpretation follows with Daniel describing a tree being cut down and the king being humbled “until you recognize that the Most High is ruler over the realm of mankind and bestows it on whomever He wishes”. We learn that the king’s mind becomes the end result of his self-worship – inhuman and like a wild beast of the field.  The book of Daniel gives us insight into God’s vindicating justice. We see God seeking to spread knowledge of himself within a beastly empire.

The Revelation of Jesus the Messiah is a long letter relaying what Jesus was told by his Father about future events. Jesus communicates what he has been told to an angel. The angel then reports the revelation to the Lord’s servant John. And John, we learn in Rev 1:2, is someone in God’s court room who “bore witness to the word of God and to the testimony of Jesus the Messiah”.

John also bears witness to the judgments that will rain down, like stars falling from the heavens, on the “…kings of the earth, the leading courtiers, the generals, the rich, the power brokers, and everyone, slave and free” as they run to hide themselves “among the caves and the rocks of the mountains” screaming. 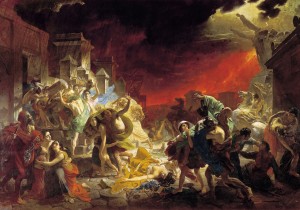 “Fall upon us!” they were saying to the mountains and rocks. “Hide us from the face of the One who sits on the throne, and from the anger of the lamb! The great day of their anger has come, and who can stand upright?” – Rev. 6: 12-17

The letter is from “He Who Is and Who Was and Who is to Come”. The Son of Man – the True Human and Lord of Creation– is introduced in Revelation chapter 1. He is the one who can rightly judge the beastly rulers and their empires and the Beast itself and those who allowed themselves to be marked by the Beast.

The letter records God’s accounting of those entrusted with the Gospel at one time. Seven letters are read to seven churches. These written assessments remind me of the writing on the wall in Daniel’s day (Daniel 5: 24-26), condemning a ruler who held authority over others and acted against God and man. Ultimately, beastly rulers will not stand before God. They will be removed from power.

“Then the hand was sent from Him and this inscription was written out.

“Now this is the inscription that was written out: ‘MENE, MENE, TEKEL, UPHARSIN.’ “This is the interpretation of the message: ‘MENE’—God has numbered your kingdom and put an end to it. ‘TEKEL’—you have been weighed on the scales and found deficient. ‘PERES’—your kingdom has been divided and given over to the Medes and Persians.”

And, like the seven symbolic days of creation, there are seven seals which are opened and seven trumpets are blown and seven bowls of God’s wrath are poured out onto creation. In the day of the Lord the world will be purged of its patterns of perverted tyrannical power and of those who have rebelled against God and took on an inhuman existence, even to the extent of murdering those loyal to God:

When the lamb opened the fifth seal, I saw under the altar the souls of those who had been killed because the of the word of God and because of the witness they had borne.

They shouted at the tops of the voices. “Holy and true Master!” they called. How much longer are you going to put off giving judgment, and avenging our blood on the earth-dwellers?” -Revelation 6:9-10

Revelation, as it describes the beast that comes out of the sea, parallels Daniel’s vision description of beasts (Rev. 13). Both the beast from the sea and the beast of the earth are defeated in battle.

Before we “see a new heaven and new earth” (Rev. 21) the enemy of man and the Son of Man, the Deceiver, the Great Beast, the Satan, will be dealt with once and for all:

… the devil, who deceived them, was thrown into the lake of burning sulfur, where the beast and the false prophet had been thrown. They will be tormented day and night for ever and ever.

Unlike many of the world’s attempts at justice, God’s justice names evil for what it is and deals with it. Evil’s power was dealt with on the cross. Jesus took all evil upon himself and defeated it. Evil no longer has power over us, unless you decide it to be so. For the loyal, God is Just and Justifier:

God put Jesus forth as the place of mercy, through faithfulness, by means of his blood. He did this to demonstrate his covenant justice, because of the passing over (in divine forbearance) of sins committed beforehand. This was to demonstrate his covenant justice in the present time: that is, that he himself is in the right, and that he declares to be right everyone who trusts in the faithfulness of Jesus. – Romans 3: 25-26

Will God’s final justice have you crying out about acts of justice on your terms: “Hide us from the face of the One who sits on the throne, and from the anger of the lamb! Who can stand upright!?” Or, will God’s justice vindicate your loyalty to His faithfulness?