It’s a mystery to me

We have a greed with which we have agreed

You think you have to want more than you need

Until you have it all you won’t be free

I hope you’re not lonely without me.

It feels so “Oprah-kind” to know that the minimum pay for your effort will be set at a fixed rate by Big Brother.  Big Brother, of course, is not paying for the increase but he is certainly gaining political capital and tax revenue from your increased paycheck.

The media abets the ravenous pols by constantly bombarding us with income deltas as if materialism is the bread of life. Karl Marx did care about how much someone else made, he dined out on it.

On a daily basis I find some financial webpages and articles written about comparative CEO salaries. OMG! Reporter, get the socialist’s dirty needle out of your arm! Are you reporting these numbers so as to invoke class-ic envy?

“There is some ill a-brewing towards my rest, For I did dream of money-bags to-night.”  William Shakespeare

“Minimum wage laws make it illegal to pay less than the government specified price for labor.  By the simplest and most basic economics, a price artificially raised tends to cause more to be supplied and less to be demanded than when prices are left to be determined by supply and demand in a free market.  The result is a surplus, whether the price that is set artificially high is that of farm produce and labor.

Making it illegal to pay less than a given amount does not make a worker’s productivity worth that amount….” Quote from Thomas Sowell, economist, “The Thomas Sowell Reader”.

Nothing happens in isolation. Consider also that the Obamacare/health “coverage” is also mandated. So, a worker’s hours are restricted to ensure that a business remains profitable to ensure employee jobs. And, a worker who doesn’t fulfill the Obamacare mandated-Justice Ruth Ginsburg-and-Justice John Roberts-mandated requirements is fined or taxed-actually, both. Big Brother has the gun law of coercion to your back.

Under the “People should and do trust me” department…

Why “income inequality”? Because good money is thrown after bad.

Paul Krugman Sticks It To Poor People With $225,000 Salary To Study Income Inequality

“This week, trustees of the cash-strapped, taxpayer-funded City University of New York (CUNY) system approved a hefty annual salary as well as the fancypants title of “distinguished professor” for Paul Krugman.

Krugman’s $225,000 salary — which is $18,750 per month — does not include his undisclosed earnings from other ventures, the sum of which could be substantial.”

Why “income inequality”? (You don’t have to pay me!)

-Folly:  A fool and his money are soon parted.” That’s what state lotteries and casinos count on.

-Government and Progressive Income tax:  I made a few dollars as a store clerk at age thirteen. Now I make a whole lot more money closer to retirement. And this is because I have worked a lifetime to obtain skills that have been of value to my employers. Should I be taxed more because I make more money due to the manifest effort on my part to take care of my family and pay my bills, just to satisfy the ‘social justice” gnosis?

–To every thing there is a season, and a time to every purpose under the heaven:  Over the course of decades I have had “income inequality” every year of my life. Should I demand equal pay because someone is making more at some point in time? No way! I need to make myself of more value to my employer and then ask for an increase in pay or find a better paying job.  This brings me to my next point…

-Denial:  Degreed Millennials, as an observation, think that their academic credentials buy them a ticket to ride without much effort on their part. Some even think that blue-collar labor is beneath them. This denial of reality of their situation and a lack of healthy self-awareness is the result, in part I believe, of the effects of psychotherapy’s delusional self-awareness pharmacopeia on our culture. Psychotherapy provides the illusion that you can live an existence free of any tension over time, through endless sessions of… therapy. An analysand’s every thought must be reviewed, be given equal doses of “hmmm” and then before the open-ended session’s time is done, be given equal value. “You are not to blame yourself.  XYZ is responsible. Look, our time is up. See you next week. Pay up front.” And, psychotherapy’s moral deficit is not a cure for a person’s lack of awareness of the obvious-many a Millennial thinks he is entitled. And, of no value is the politician’s “Hope and Change” pharmacopeia.  A Minimum wage is not a cure at all.  It is a placebo that generates no economic health whatsoever. In fact it denies the existence of bad economic choices an individual has made. Yet, perverse politicians say “it’s not you.  You didn’t build that problem. The institution of big business is the problem. It must take our ‘medicine’ for your cure.

-Misdirected Self-awareness:  Millennials tend to think of only what they need and not what an employer needs. Naiveté. 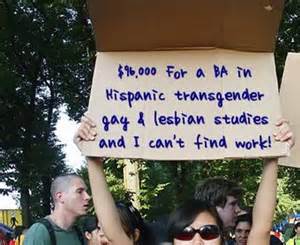 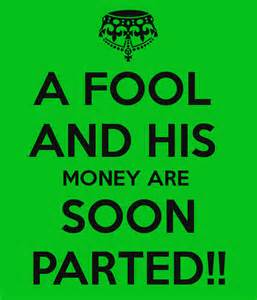 obvius in the sway

-Some people have a spending problem. Some people reinvest their money and create jobs. Others will spend their money and ask “Why am I ‘poor’ when others are rich?” The makeshift poor will demand the doctors of politics to up their dosage of cornucopian wealth.

-Lack of Wisdom:  “He that wants money, means, and content, is without three good friends.”  William Shakespeare

-Lack of Wisdom: “It is senseless to pay tuition to educate a fool, since he has no heart for learning.” Proverbs 17:16

-Lack of Wisdom: “Lazy people want much but get little, but those who work hard will prosper.” Proverbs 13:4