I bet you know Nike’s motto just from their swipe logo:  “Just Do It.”

Why as Americans have we turned from away from meritocracy toward a progressive Disneyland of ‘equal’ ‘happy’ outcomes? Is it because of laziness? Perhaps. Is it due to sociologists and psychologists and therapists promoting untethered self-esteem and dignity? Most likely.  Is it due to the politically partisan pandering of materialism by Progressives which demands an unnatural faux-equality to gain votes?  Most likely. Whatever the lack of motivation, the Apostle Paul (c. 5 – c. 67) knew that man’s inherent idleness would kick in if he smelled a free lunch:

“And, indeed, when we were with you, we gave you this command:  Those who won’t work shouldn’t eat!” Paul’s letter to the church at Thessalonica, 2 Thessalonians 3:10

For the people who have to prove themselves day after day, an athlete for example, the fact is that they have to earn their place on the team.  Sports fans take meritocracy as a matter of fact.  Why can’t we as an American people not only dream but also train and discipline our lives to create the outcomes that we desire to happen, as a matter of fact?

PITTSBURGH, PA – DECEMBER 28: James Harrison #92 of the Pittsburgh Steelers warms up prior to the game against the Cincinnati Bengals at Heinz Field on December 28, 2014 in Pittsburgh, Pennsylvania. (Photo by Justin K. Aller/Getty Images)

“[James]Harrison took to social media this weekend to lash out at the idea that his sons should receive participation trophies simply for playing sports, saying that when he found out his sons were given such trophies, he demanded that they be sent back. Harrison believes that a trophy should be something you earn by being the best, not something you receive just for trying.

“I came home to find out that my boys received two trophies for nothing, participation trophies!” Harrison wrote. “While I am very proud of my boys for everything they do and will encourage them till the day I die, these trophies will be given back until they EARN a real trophy. I’m sorry I’m not sorry for believing that everything in life should be earned and I’m not about to raise two boys to be men by making them believe that they are entitled to something just because they tried their best…cause sometimes your best is not enough, and that should drive you to want to do better…not cry and whine until somebody gives you something to shut u up and keep you happy.”

Harrison concluded with the hashtag, “Harrison Family Values.” In James Harrison’s household, there’s no credit given for just showing up. If you want a trophy, you’d better win.” 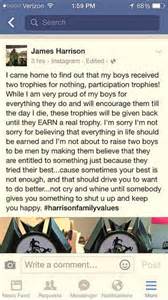 “Egalitarianism. Is It Equal To The Task?”

“Do you not know that in a race all the runners run, but only one gets the prize? Run in such a way as to get the prize.”

Here the Apostle Paul is writing a word of encouragement to the church in Corinth (1 Cor. 9:24). Remember Corinth?  It is a city is in Greece, Greece being the birthplace of the Olympics.

Should Olympians ‘race’ when everyone gets the same prize at the finish line?

Egalitarianism is posited as a means to create the unspoken Utopian bureaucratic island where near-perfect socio-politico-legal systems exist and where no one has advantage over another except for the so-called elite who have been ‘blessed’ with “superior intellect.” Only they know enough to define life for you. (e.g., Cass Sunstein’s recent Nudge book).

In my younger days I was a sprinter.  I would run many heats and then the final events.  To do so I had to prepare for the weekly track meet. I will use my own ‘summer event’ experience to help you to consider whether egalitarianism is equal to the hard work and discipline required for life’s trials and to decide whether the rise of “egalitarianism” will benefit or hurt our society.

A Tale of Two Foot Races

Eight men enter a race.  They are roughly about the same height and weight but come from very different backgrounds. The eight men enter the race knowing that there will only be one winner.  It was for this outcome that they had prepared themselves with rigorous discipline during the past four years.

Months prior to the track meet the eight men are told of the rules:  A runner must run in qualifying heats. If the runner is successful in those heats the runner will then be allowed to compete in the final race with the other qualifying runners;  a runner who jumps the gun twice at the starting line will be disqualified as having a “false start”;  the commands “Ready”, “Set” and a gunshot will be used by a track official to start the race fairly;  each runner must stay in his lane or he will be disqualified;  runners will be timed and the first runner to cross the finish line will be the winner of the race.

The runners all agree and sign off on the rules before the race.

On the day of the race and after qualifying in the heats eight runners come to the starting line.  They know that they must run straight ahead in their own lane to reach the one-hundred meter line. They know that if they jump the gun twice they will be disqualified from running. They know that they must sprint as hard as they can to cross the finish line first. They are knowingly competing for first place. The race before them has now become the culmination of years of exhausting training and dedication to finishing the race and receiving first prize.

The winner of the race is the one who breaks the tape. There is also a second, a third and fourth place finisher. The runners-up each congratulate the winner for his speed and, implicitly, for his fidelity to the rules and his commitment to the sport of racing.

The first three finishers receive medals, adulation and wreaths of honor from the thousands who have come to watch a fair race between those who have so vigorously prepared themselves. The experience of the race has bolstered each runner’s self-esteem. The cheering crowd is also moved by each runner’s self-sacrifice, dedication and self-discipline. This spectacle has confirmed the crowd’s understanding of playing by the rules and aspiring to excel within those rules. Those who witnessed the race that day are stirred, encouraged to excel at what they do.

All eight racers later return home.  The runners-up are now more dedicated than ever to prepare for another day of racing and to receiving their own crown of victory. Ciltius, altius, fortius.

Eight men enter a race.  They are roughly about the same height, weight but come from very different backgrounds. The eight men entered the race knowing that everyone will be a winner.  It was for this outcome that they saw no need to prepare themselves with rigorous discipline during the past four years. They just had to show up.

Months prior to the race the eight men are told the rules.  They are told the rules are subject to change at the time of the race based on the current ad hoc articulated reasoning of one superior intellectual with unquestionable virtue.  A runner must run in qualifying heats but this will not be a constraint. Whether or not a runner is successful in those heats he will be allowed to compete in the final race with other ‘qualifying’ runners. The heats are basically events created to satisfy the need for more equality.

More rules: a runner who jumps the gun twice at the starting line will not be disqualified from running. Instead he will be given another chance; the commands “Ready” and “Set” and a gun shot will be used by a track official to start the race fairly, though any sincere attempt to cooperate with the official will be accepted; each runner must stay in his lane or he will be disqualified unless, of course, their background is such that they have never stayed within the lines; runners will not be timed because such keeping of minutes would be discrimination against slower runners.  The first runner to cross the finish line will wait at the finish line so that everyone will be considered a winner of the race. This must be done at any personal cost to the first one crossing the finish line.

The runners agree and sign off on the rules before the race.

On the day of the race all of the runners come to the starting line.  They know that they are supposed to run down to the finish line before the outcome-determining patrons. They know that there will be equal prizes and the egalitarian appreciation of well-wishers to look forward to. They are going to run for this reason. This race is now the culmination of years of knowing that the battle is just showing up and doing what you are told.

At the finish line everyone is a Finisher, even those who left the race due to being out of breath. There are hand-shakes and kudos all around for having shown up for such an event.

At the awards ceremony all the runners receive medals and congratulations. Thousands have come to watch a race between runners who have shown up for a race where the outcome was predetermined to be fair – fair as defined by the few judges of superior intellect and of unquestioned virtue.

Later, all the runners return home and rest for another day of showing up.