“This dismissal of the American people’s intellectual, spiritual, and moral substance is the very heart of what our ruling class is about. Its principal article of faith, its claim to the right to decide for others, is precisely that it knows things and operates by standards beyond others’ comprehension.

While the unenlightened ones believe that man is created in the image and likeness of God and that we are subject to His and to His nature’s laws, the enlightened ones know that we are products of evolution, driven by chance, the environment, and the will to primacy. While the un-enlightened are stuck with the antiquated notion that ordinary human minds can reach objective judgments about good and evil, better and worse through reason, the enlightened ones know that all such judgments are subjective and that ordinary people can no more be trusted with reason than they can with guns. Because ordinary people will pervert reason with ideology, religion, or interest, science is “science” only in the “right” hands. Consensus among the right people is the only standard of truth. Facts and logic matter only insofar as proper authority acknowledges them.

That is why the ruling class is united and adamant about nothing so much as its right to pronounce definitive, “scientific” judgment on whatever it chooses. When the government declares, and its associated press echoes that “scientists say” this or that, ordinary people — or for that matter scientists who “don’t say,” or are not part of the ruling class — lose any right to see the information that went into what “scientists say.” Thus when Virginia’s attorney general subpoenaed the data by which Professor Michael Mann had concluded, while paid by the state of Virginia, that the earth’s temperatures are rising “like a hockey stick” from millennial stability — a conclusion on which billions of dollars’ worth of decisions were made — to investigate the possibility of fraud, the University of Virginia’s faculty senate condemned any inquiry into “scientific endeavor that has satisfied peer review standards” claiming that demands for data “send a chilling message to scientists…and indeed scholars in any discipline.” The Washington Post editorialized that the attorney general’s demands for data amounted to “an assault on reason.” The fact that the “hockey stick” conclusion stands discredited and Mann and associates are on record manipulating peer review, the fact that science-by-secret-data is an oxymoron, the very distinction between truth and error, all matter far less to the ruling class than the distinction between itself and those they rule.

By identifying science and reason with themselves, our rulers delegitimize opposition. Though they cannot prevent Americans from worshiping God, they can make it as socially disabling as smoking — to be done furtively and with a bad social conscience. Though they cannot make Americans wish they were Europeans, they continue to press upon this nation of refugees from the rest of the world the notion that Americans ought to live by “world standards.” Each day, the ruling class produces new “studies” that show that one or another of Americans’ habits is in need of reform, and that those Americans most resistant to reform are pitiably, perhaps criminally, wrong. Thus does it go about disaggregating and dispiriting the ruled.” (emphasis added)

Beyond the excerpt:  I commend Codevilla’s entire article to you.  In fact, I urge you to click on the link and print out the article.  Sit and read it and be forever changed by its content. I pray that the article opens your eyes and that moral courage arises in your heart. 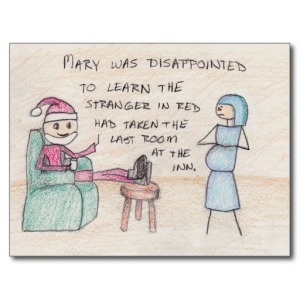 Now, perhaps, you know these culprits,  the Unconstrained Visionaries, by their characteristics:  snobbish, name-calling bullies; cliquish; desiring kinship w/other like-minded people; seeking power by government association; demanding rule by ‘right’; believing themselves morally and intellectually right; saying “You must obey us because we know better”; blinded to their  ‘well-intentioned’ actions leading to horrible unintended consequences; believing they know better than you; applying a “living constitution” template to every legal decision; using science as leverage without any depth of scientific knowledge; posturing “settled science” to quash dissent;  believing they “have the one true faith”; deeming that intentions and not results matter most; obtaining snobbery wielding government power;… combining attitude with government power, coercive.

Utopia Has No Room for You (and Swaddled Truth) in the Inn.

Us Christians, we abide in Christ wherever we are.  We’ll leave the Light on.

Background on the Constrained and Unconstrained Visions, the intuitive assumptions that shape our worldview: