The world, the flesh and the devil…

They came for Indiana, Arizona, Arkansas, Georgia, North Carolina and New York. They’re coming for you, too.

The world, the flesh …

Georgia strong-armed, squeezed: “The Walt Disney Company is threatening to stop filming in Georgia if the state’s governor signs a bill that would protect a pastor’s right not to perform gay marriage ceremonies. The bill would also “protect property owners which are religious organizations against infringement of religious freedom.”

Disney owns Marvel, which has shot major films at Pinewood Studios outside Atlanta. Such a boycott would be a significant loss for the state. The NFL is also threatening to bypass Atlanta as a Super Bowl destination if the religious freedom bill is passed. What does this news mean for those of us who support biblical marriage?””

For the love of money – capitulation: [Governor] “Deal, a Republican who was re-elected in 2014, has indicated he will review the bill in April and told the Atlanta-Journal Constitution he had a tough decision to make.

In addition to generous tax credits that draw [movie] productions to the state, the city of Atlanta hopes to land a Super Bowl in the near future after its new stadium for the Atlanta Falcons is due to open in 2017. A hope that an NFL spokesperson cautioned late last week could be burst if local laws do not meet league polices that “emphasize tolerance and inclusiveness, and prohibit discrimination based on age, gender, race, religion, sexual orientation, or any other improper standard.”

All fighting against the religious freedom of natural marriage advocates.

Four hundred companies threatened the state of Georgia with “taking our business elsewhere” if Gov. Deal signed the bill into law.

And they got what they economically coerced the governor to do.  Gov. Deal, after saying he was in no way bowing to pressure, vetoed the legislation, which sought to protect pastors and church organizations from discrimination over beliefs about natural marriage.” …

Attorney Jane Robbins, Senior Fellow with the American Principles Project, commented on the economic threats to Georgia.  “Good people are trying to live their lives according to their faith.  Are we really going to subordinate religious freedom to the love of money?”

Pastor Garland Hunt of the Fellowship of International Churches told LifeSiteNews, “There is no plausible reason for the governor to not have enthusiastically signed Georgia’s Religious Freedom Act.”

Macon’s Berean Baptist Church pastor Joe Bowker told LifeSiteNews of the legislation, “in no way is it discriminatory,” because “disagreement is not discrimination.”

You could stand me up at the gates of hell

But I won’t back down

Gonna stand my ground, won’t be turned around

And I’ll keep this world from draggin’ me down

Gonna stand my ground and I won’t back down…

Well I know what’s right, I got just one life

In a world that keeps on pushin’ me around

But I’ll stand my ground

And I won’t back down

I Won’t Back Down lyrics by Tom Petty, Jeff Lynne

Christians Must Unite Now Against LGBT Bullies and Their Allies

No, Gays and ‘Transgenders’ Are Not Being Bullied. They Are The Bullies.

Pride and Prejudice?  Why is it OK for a person to have the conviction that they are homosexual or that they are another gender?  (There is no such rationale for such belief drawn from nature and science or even from the atheist’s social Darwinism? Psychiatry and Psychology are NOT scientific fields.) When…

It is not OK for a Christian to hold the conviction that such LGBT convictions are irrational, not natural, not supported in evolution and hard science and, most importantly, do not conform to what has been known about God eons before the Long March of Cultural Marxism ever began?

Justice is no longer blind.  Now, under the purview of justice, a protected class of people has been created out of a tiny minority’s convictions about its sexuality.  Their convictions are now given a legal weight that morality would never counter balance in the scales of justice.  Your religious convictions have been waylaid to clear the way for the Pride Parade.

Hypocrisy abounds: the NBA, NFL and the CEOs of major corporations proudly quote the law as prohibiting discrimination based on age, gender, race, religion and sexual orientation. But, these Pharisees do not want to include your religious convictions in their hubristic narrative.  Karl Marx would be proud of their denigration of religion, placing it beneath sexuality and society’s coddled greed. And the Evil One applauds them. 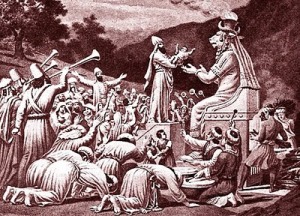 New York, London: “NEXT month [April], the Temple of Baal will come to Times Square. Reproductions of the 50-foot arch that formed the temple’s entrance are to be installed in New York and in London, a tribute to the 2,000-year-old structure that the Islamic State destroyed last year in the Syrian town of Palmyra.